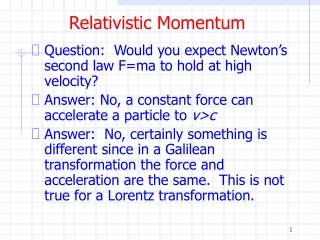 Relativistic Momentum. Question: Would you expect Newton’s second law F=ma to hold at high velocity? Answer: No, a constant force can accelerate a particle to v>c 6 Momentum - Why are the engines of a supertanker normally cut off 25 km from port? the inertia of moving objects .

Momentum - . do the yankees or the phillies have big mo (momentum) with them tonight? if you have ever been in an auto

Relativistic Electron Lab - . in this lab you will measure both the momentum and kinetic energy of electrons emitted from

Momentum - . an object of mass m traveling at velocity has a linear momentum (or just momentum), , given by units have

Are the relativistic Fe lines really relativistic? - . traineeship 2009 :. a systematic analysis of the fe k line from

Momentum - . momentum - property of all moving objects; a vector quantity defined as an object's mass times its velocity

Momentum/Impulse - . momentum recap. momentum: the product of the mass and velocity of an object “how hard it is to

Angular Momentum - . inertia and velocity. in the law of action we began with mass and acceleration f = ma this was

Momentum, Impulse and Recoil - . momentum. a truck is rolling down a hill than a roller skater with the same speed; which

Momentum - . the texas rangers lost momentum at the end of the season. the ravens gain momentum as the season goes on.

Momentum - Mass in motion. momentum. chapter 8.1. momentum objectives (leave space in between). what is momentum? what is