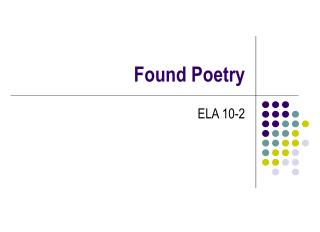 Found Poetry. ELA 10-2. What is a found poem?. A found poem is a collection of bits of text, taken from prose, and shaped into poetry. These bits have something that makes them unique, and they work as stand-alone poems.

Poetry - Haiku - . mme dimarco. at the end of this unit. you will be expected to submit an anthology of poems as well as

Poetry Form: Found Poetry - . a found poem, a collage of

MLK Found Poem - . using words and phrases from the “i have a dream” speech, create a poem based on the speech. to

Found Poems - . what , why , and how. by dustin and anna. what you need to know. a post reading activity comprehension,

Poetry - . by: keyondra gamble. my life is a dream. autumn “my life is a

Cross-Curricular Found Poem - . what is it?. a found poem uses language from non-poetic contexts and turns it into

Found Poems in an Altered Book - . mrs. n ájera - crafts &amp; pottery. text from the art of happiness written by