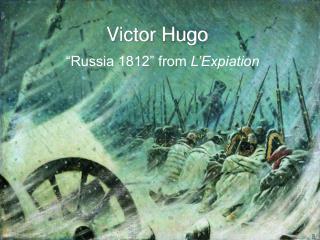 Victor Hugo. “Russia 1812” from L’Expiation. Victor Hugo was born on February 26, 1802 in Besan çon, France. He was born into a military family; his father was an officer in Napoleon’s army. Victor Hugo - . bob ponterio . hugo's life . victor hugo was a prolific writer who is well known today for his many

Victor Marie Hugo - . parents . victor was born in besancon. his father was joseph leopold sigisbert hugo his mother was