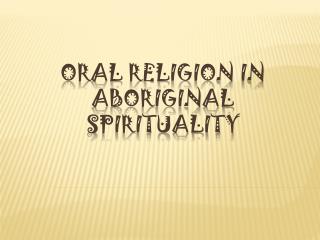 Oral Religion In Aboriginal Spirituality. Oral Religion : Those cultures that have used spoken language to hand down their religious traditions from generation to generation. Examination of the Oral Cavity - . physical evaluation. oral examination. many diseases (systemic or local) have signs

Daily Oral Language - . review daily you need to be able to explain why a word is changed in every sentence. day 1 -

Oral Surgery And Oral Infections - . by: terri and premlata. oral surgery. includes: the diagnostic and surgical