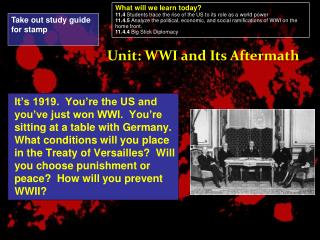 What will we learn today? 11.4 Students trace the rise of the US to its role as a world power 11.4.5 Analyze the political, economic, and social ramifications of WWI on the home front. 11.4.4 Big Stick Diplomacy , Dollar Diplomacy, and Moral Diplomacy. Take out study guide for stamp. Happy Monday! Please take out your Study Guide - . submit: page of notes on article, “the challenge of antibiotic

Take out Assignment 5: Buying a Car for a stamp - . what will we learn today? 12.2.7 analyze how domestic and

Take out a pencil Take out your “Study Guide” Also, take out: You can use these on the test! - (1)electronic

TAKE OUT - . science notebook catalyst sheet pencil homework policy/safety contract if you haven’t turned them in yet.

TAKE OUT - . i will give you a new catalyst sheet pencil science notebook, open to homework. catalyst. use the first 5

Take Out - . pencil eraser. when finished with quiz…. copy down “good data” rules from whiteboard onto the bottom

Take out - . catalyst sheet pencil science notebook homework should be in a pile in the center of your table fill out a

Warm up (Have HW out for a stamp) - . magnesium and hydrochloric acid react to form magnesium chloride and hydrogen

Take out a sheet of paper and title: Quarter 1: Literature Study Guide - . quarter 1: literature study guide. in your