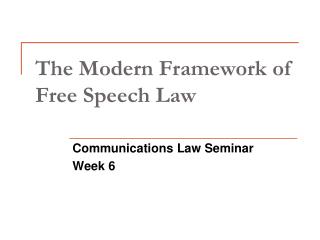 Free Speech - . by: awesome people. origins of free speech. free speech was originally conceptualized at the beginning of

Pros of Free Speech - . people have the right to have their opinions heard and considered. this guarantees that all

Free Speech Rights of Minors - . jour3060: communication law and regulation. what are some issues to consider, when

Free Speech on the Internet - . information on my topic. freedom of speech on the internet is interpreted in many

CONSTITUTIONAL LAW 32 Framework of the Charter Analysis - . shigenori matsui. 1. introduction. what is the framework of

Is Your Speech Free? - . a brief story! a lovely day at the zoo with my wife!. sit back and listen my nomination speech