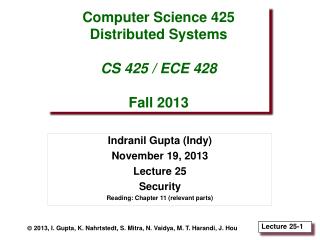 Sicherheit in und durch verteilte Systeme - . security in and by distributed systems transparencies for the lecture

DISTRIBUTED COMPUTING - . fall 2007. road map: overview. why are distributed systems interesting? why are they hard?.

Part 2 Distributed Systems 2009 - . again, why are we studying distributed systems?. first, and most importantly: the

Computer Security 463.3 Key Management - . fall 2005. based on slides provided by matt bishop for use with computer