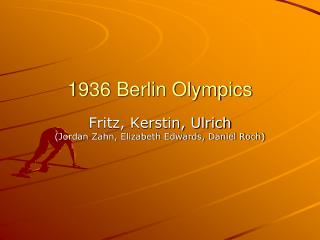 Math Olympics - . history how to plan a competition v ideo of actual competition participate in a couple of rounds

Jesse owens and the berlin summer olympics of 1936 - . biography. jesse owens was born in alabama in 1913 and grew up in

The Olympics. - The olympics. by: mayson robert morris.