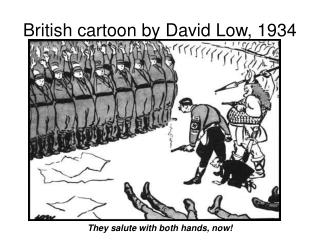 British cartoon by David Low, 1934. They salute with both hands, now!. The Night of the Long Knives. Key question: Why did Hitler order the massacre of hundreds of Nazis in June 1934?. Background. Hitler was Chancellor, but not yet completely in control.

What is the main message of the cartoon?

Hitler’s rise to power - . hitler rose to power after world war one. hitler was a powerful speaker who got the

How to make a cartoon By Ladi T. Ogundipe &amp; David Bello - . go on aniboom.com/shapeshifteranimachine.aspx scroll

The Nazi Consolidation of Power 1933-1934 - . lesson objectives. by the end of this lesson you should: understand the

What is a Political Cartoon? - . it is a funny way of making a point also it has many steps to it. step one: know about

Totalitarianism: Hitler, Stalin, Mao - . what is totalitarianism?. form of government where one person or one political

Cartoon A Cartoon B Cartoon C Snapshot - On the back of the paper, explain the message each cartoonist is trying to

What is a political cartoon? - . cornell notes. cartoon analysis guide. symbolism -cartoonists use simple objects, or

LO How to explain the main message of a cartoon - . think about these questions about each cartoon. a) look at the date

Source B : a Cartoon from Punch - March 1938 - . 2. explain the significance of the cartoon (source b) in the context of

This cartoon by the British cartoonist David Low appeared in the Evening Standard on 20 September 1939. - The title of

This document was created at The British Cartoon Archive - http://www.cartoons.ac.uk - Cartoon group - cartoonists and

This cartoon – ‘the Gap in the Bridge’ – was drawn by Leonard Ravenhill, political cartoonist for the British