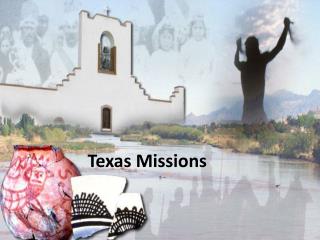 Texas Missions. Missions were Spain’s main way of colonizing Texas and were expected to support themselves. The first of missions were established in the El Paso area, then East Texas and finally in the San Antonio area.

Spanish Missions in Texas - . summary so far. europe eyes the americas. columbus came to the new world looking for gold

California Missions - . by ms. cardenas. introduction to the

Life in Spanish Missions - . missions. the mission was spain’s main tool for colonizing texas. in the missions the

Spanish Settlement in Texas 1650-1800 Part II - . spain reacts to the “chicken war”. after the chicken war the

MISSIONS AND PRESIDIOS OF TEXAS (Under spain) - . missions were built by spain to establish control of what is now texas

THE MISSION SYSTEM IN TEXAS - . what did we learn about it?. purpose. lasalle’s expedition alerted the spanish to

The Spanish Missions Section 3: The Spanish Return to Texas - . bellwork. why did the spanish missions in east texas