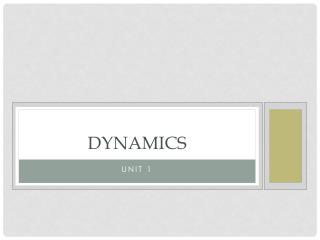 Dynamics!!! - . by: ryan matejek. what are dynamics?. dynamics are the different types of volume you can play there are

Dynamics - . by: sarah poff. dynamics…. how loud or quiet the music is. written in italian. used by musicians

Dynamics - A branch of mechanics that deals with the “ motion ” of bodies under the action of force s. dynamics. two

Dynamics - . the generalized momentum was defined from the lagrangian. euler-lagrange equations can be written in terms

Dynamics - . vorticity in the previous lecture, we used “scaling” to simplify the equations of motion and found that,

Dynamics - . the study of why objects move. forces. sir isaac newton studied the causes of acceleration. he came up with

Dynamics - . dynamics. relationship between the joint actuator torques and the motion of the structure derivation of

Dynamics - . what is dynamics?. dynamics is the study of forces. what are forces?. push or pull on an object what are

Dynamics - Lecture 11. dynamics. kinematics – concerned with the geometric aspects of motion without any reference

Dynamics - . galileo an object will stay in motion unless friction is present. friction acts between surfaces of objects