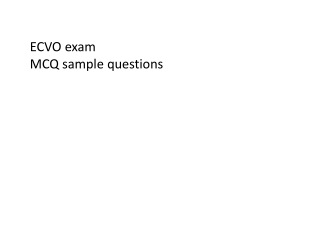 ECVO exam MCQ sample questions. Which one of the following bones contributes to the orbit in the horse but not in cattle?. a) Zygomatic. b) Maxillary. c) Sphenoid. d) Temporal. STRATEGIES FOR APHUG MCQ SAMPLE MULTIPLE CHOICE QUESTIONS - Directions: each of the questions or incomplete statements

Sample VCE Biology Exam Questions - . question 1 (q1, 2007) a polysaccharide that can be made in some animal cells is a.

Two sample exam questions HRM/OB - . joan harvey george erdos. we include two examples of longer questions. in these, we

Sample Questions for Hour Exam 1 - . 1. a hydrogen atom has one electron. how many covalent bonds can hydrogen form ? a)

Sample questions - . play for slideshow. a security operative should be?. ineffective at communicating reliable and

Sample Questions - . econ 2420 exam 1. opportunity cost. if you win a free ticket to a movie plus all you can eat at the

Sample Questions - . note - some of these are for adding new information to your list of things to know for the exam. 1)

Approach To Acid Base Disorders - . one of the seven wonders petra of jordan. case