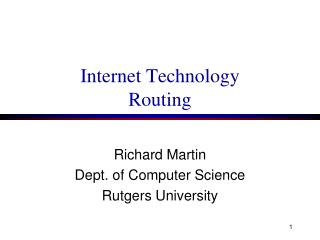 Internet Technology Routing. Richard Martin Dept. of Computer Science Rutgers University. Forwarding vs Routing. Routing is the decision which path to take Forwarding is the lookup once the decision has been made These functions are typically decoupled in real systems. Routing Algorithms.

Routing on the internet - . cosc 6590. routing protocols. routers receive and forward packets make decisions based on