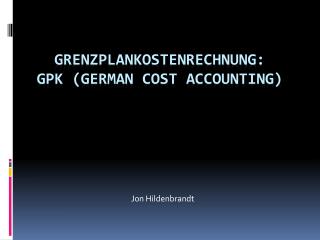 Jon Hildenbrandt. Grenzplankostenrechnung : GPK (German Cost Accounting). What is GPK??. GPK is a form of German cost accounting used by many companies in German speaking countries like Germany, Austria, and Switzerland.

Introduction to Accounting - . purpose. to teach the basics of accounting to those students entering the mba program at

Basic Concepts of Financial Accounting - . chapter 2. the basic accounting equation. financial accounting is based upon

Financial Accounting - I - The whole accounting years divided into various segments according to the period ...