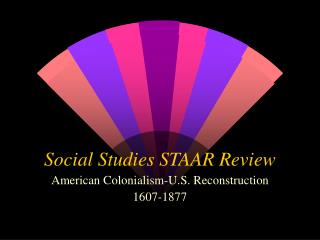 Social Studies STAAR Review. American Colonialism-U.S. Reconstruction 1607-1877. Alaska. Purchased from Russia in 1867, it was commonly referred to as “Seward’s Folly or Seward’s Icebox” by Americans who felt it was a waste of money. Battle Hymn of the Republic. Social Studies Review! - . all third grade s.o.l’s (because we know it all!). help needed!!!. i am the social studies

Social Studies Review: - . map unit. what is a map?. a map is a drawing that shows where places are. what is included on

Social Studies Review - . unit 8 lesson 1. the king and parliament taxed the colonists to …. pay for the french and

Social Studies Review - . unit 4 (chapter 5) - immigration. what is the immigration and refugee protection act?. most

STAAR Review - . category 4 students demonstrate an understanding of the structures and functions of living organisms and

STAAR Review - . the important thing about staar… is that i do my best!. what do you know about staar?. poetry review.

STAAR REVIEW - . lgi 2013. purpose. the purpose of the lgi review is to review all of the information we have covered