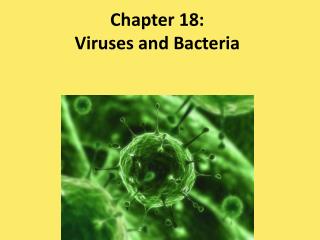 Chapter 18: Viruses and Bacteria. 0.5 m. Figure 18.1. Overview: Microbial Model Systems Viruses called bacteriophages Can infect and set in motion a genetic takeover of bacteria, such as Escherichia coli. E. coli and its viruses Table of Contents - . viruses bacteria viruses, bacteria, and your health. - viruses. what is a virus?. a virus is a tiny

VIRUSES - . give the worksheet a try!! answers can be found in chapter 19 section 2 on viruses (you need to look at the

Viruses and bacteria - . bacteria. the word bacteria is so familiar that we will use it as a common term to describe

Bacteria and Viruses - . viruses. viral characteristics and structure from the latin meaning poison not living organisms;

D7 - Antivirals - . differences between bacteria and viruses how does antiviral drugs work ? the aids problem. d.7.1. how

Viruses &amp; Bacteria - . chapter 17 biology 11 presentation put together by mandie lynn walls. what are viruses. a

Bacteria and Viruses - . viruses. viruses are not alive!!! viruses are made up of genetic material surrounded by a

Viruses &amp; Bacteria - . a guide to understanding the similarities and differences of viruses and bacteria. two