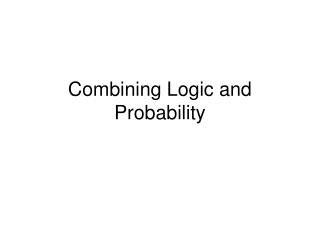 Combining Logic and Probability. Can logic be combined with probability? Trivially yes: logic can be combined with anything. Slightly less trivially, logic is already involved in constraining probabilities: certain deductive relationships have to be respected.

Continuous Random Variables - . chapter 6. overview. this chapter will deal with the construction of discrete probability