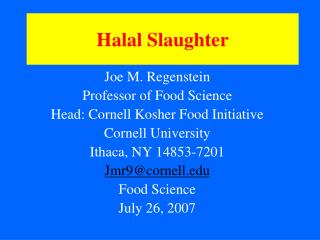 Animal Slaughter - . approximately one cow is killed every 20 seconds, 200 cows are killed per hour and 2000 cows are

Horse Slaughter - . arguments against slaughter. veterinarians for equine welfare (vew) is a group of veterinarians

HALAL - ¿. halal. challenges in halal certification in the philippines. halal concept. halal is a qur’anic term

Kiera Slaughter - . “i’m good at”. dancing cleaning up babysitting doing my work in school talking on the phone.

Group Slaughter - . the battle for chemical domination on the open seas. set-up:. number 1-10 on your piece of paper.