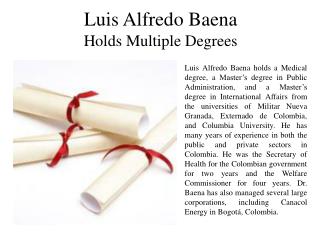 Luis Alfredo Baena is a former public health official in Bogotá, Colombia, where he worked for the national government as the Secretary of Health. He also served as the Welfare Commissioner of Colombia for four years before eventually coming to the United States to take a course at Harvard University. Degrees - . by emily lopez. note: “degrees&quot; can also mean temperature, but here we are talking about angles.

degrees - . units of latitude and longitude . an imaginary line that runs around the center of earth, halfway between the

Alfredo Mirande - . born in mexico city came to the united states at the age of nine professor of sociology and ethnic