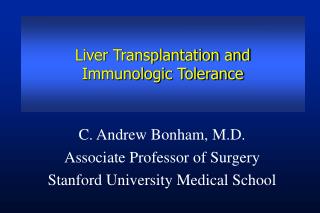 International Day for Tolerance - . international day for tolerance. what is tolerance? unesco's declaration of

The Liver and Pancreas - . what is the liver. the liver is the largest gland in the human body. it is located under the

Liver - . objectives location of the liver indentify the surfaces of the liver and their anatomical relations porta

Limitations to the Field of Transplantation - . drug treatment-related complications chronic rejection availability of

Organ transplantation - Transplantation:. process of taking a graft cell, tissue or organs from one individual the

Anesthesia for Organ Transplantation - . all vital organs: heart, lung, liver and kidney, can be supported by technology

Who Needs a Liver Transplant? - Liver is the most vital organ of the human body, which protects the body from various