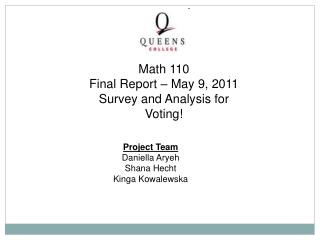 Math 110 Final Report – May 9, 2011 Survey and Analysis for Voting!. Project Team Daniella Aryeh Shana Hecht Kinga Kowalewska. Topics. Identify a business or social issue to which surveying will get to the mind of the consumer Addressable Minds… what is it, and how it works

Welcome - . the daniel seminar. nebuchadnezzar’s judgement. structure of daniel 4 . a royal testimony (4:1-9) the

The New England Patriots - . come step on the field and see the best team in the nfl. presented by: jt ahern project 12:

Using RTI for LD Eligibility: We Are All Members of the Assessment Team Oregon RTI Project - Sustaining districts