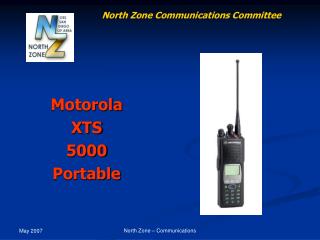 North Zone Communications Committee. Motorola XTS 5000 Portable. Antenna Install/Removal. 1. Screw the antenna into the antenna receptacle on top of the radio 2. Tighten the antenna firmly with your fingers 3. Reverse to remove antenna. Have You Ever Used A Motorola Walk Talky In Delhi NCR? - A walky â€“talky can be considered as a device which is