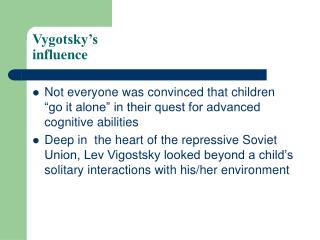 Vygotsky’s influence. Not everyone was convinced that children “go it alone” in their quest for advanced cognitive abilities Vygotsky Education - Agenda. questions about and discussion of last week's readingsintro to the concept of mediationstudy

Memory Vygotsky Style - . b y meghan elfelt. “the very essence of human memory consists in the fact that human beings

Social Influence - Social psychology the scientific study of how we think about, influence, and relate to one another.