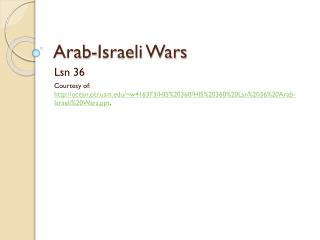 ARAB - ISRAELI WARS Part I - . partition to the plo. increased jewish migration to palestine in 1930’s from nazi

ARAB-ISRAELI WARS and QUEST FOR PEACE - . arab-israeli wars. 1 . may-june and july-december 1948 israel vs.

Arab- Israeli Conflicts - . the middle east in the twentieth century. what is the un?. before we can begin looking at the

ARAB ISRAELI CONFLICT - . background questions. what is this conflict about? what are the roots of this conflict? jewish

Arab-Israeli Conflict - . shoah. the nazis. in 1933 the nazis came to power in germany. immigration exploded as jews