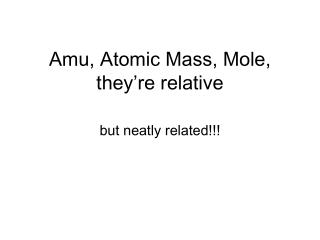 Amu, Atomic Mass, Mole, they’re relative. but neatly related!!!. In the early days how much does an element weigh? how much does an atom weigh?. Just take a stab… “I decree that hydrogen will have a standard mass of 2!” Stanislao Cannizzaro ( 1826–1910 ),. Atomic Mass - . atoms are so small, it is difficult to discuss how much they weigh in grams use atomic mass units. an

Relative atomic mass - A r - . just another way of saying how heavy different atoms are compared with the mass of one

Mole-Mass and Mole-Volume Relationships - . the mole-mass relationship. to convert the mass of a substance to the number

Atomic Mass - . atoms are so small, it is difficult to discuss how much they weigh in grams. use atomic mass units. an

Mole – Mass Stoichiometry - . in a mole-mass problem , you are given the mass or moles of one substance and are asked

Atomic Mass - . although it is possible to measure the actual mass of an atom, it is more convenient to use relative

Stoichiometry: Mole-Mass equations - . ex 5) how much oxygen will be consumed when 3.92 moles of methane (ch 4 ) are

Atomic Mass - . atomic number. atoms are arranged on the periodic table in order of atomic number, or the number of