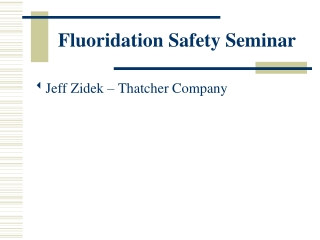 Fluoridation Safety Seminar. Jeff Zidek – Thatcher Company. Introduction. The purpose of this presentation is to introduce some important safety facts and other useful information regarding fluoridation. Some properties of Fluoride Practical handling of Fluoride Muddy waters: the use and abuse of findings from the 'York Review' on fluoridation Paul Wilson - . what policy makers