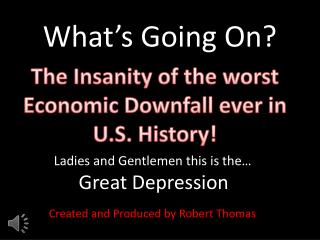 The Insanity of the worst Economic Downfall ever in U.S. History!. What’s Going On?. Ladies and Gentlemen this is the… Great Depression. Created and Produced by Robert Thomas. The Stock Market Crashes Abruptly.