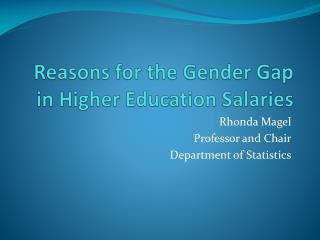 Reasons for the Gender Gap in Higher Education Salaries Reasons for the Gender Gap in Higher Education Salaries

Differential Educational Achievement 2.Gender - . until the 1980’s all the sociological research on gender in education

The Gender and Pedagogies project - . explored the ways that gender and other social identities (e.g. class, ethnicity,

What You Should Know About Higher Education - . first, what does the term “ higher education ” mean?. “higher

Objectives of the Study - Parallel session 5a: gender issues in post-primary education negotiating the interface between