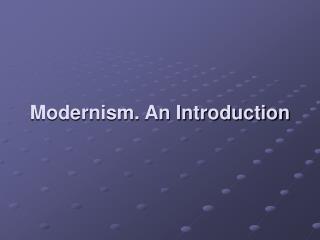 Modernism. An Introduction. Pre – requisites for Understanding. Neoclassicism dominates literary production up to the Romantic period in literature Neoclassicism has its roots in the Classical period (Plato, Aristotle, Socrates, Sophocles). MODERNISM Modernism is an arts movement that predominantly - Took place in the first half of the twentieth century.

An exploration of Modernism - . learning targets: 1) understand modernism as a literary movement and influence of

MODERNISM - . marco maran. what is modernism?. it describes a series of reforming cultural movements in art, music and

Modernism - . …. …. modernist literature has its origins in the late 19th and early 20th centuries, mainly in

MODERNISM - . the death of the american ideal? 1914-?. the american dream: part i. usa as the “new eden” beautiful

Modernism - . the guiding principles of this movement were: -a break from old traditions , -continual advancement -and