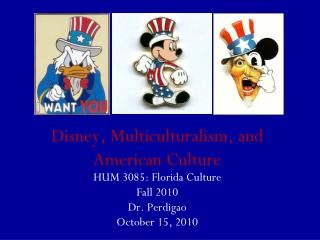 Walt Disney World in Orlando, Florida - Walt disney world or simply disney world is comprised of theme based parks and

Why America is not Exceptional - . immigration and national identity in europe and the united states eric kaufmann,

Walt Disney Imagineering - . what?. walt disney imagineering is a broad spectrum. there are many branches that break off

American culture - Who am i  laura mendoza born and raised in espoo, finland studied and worked in seattle, usa for

AMERICAN MODERNISM - . 1914-1946. after the great war. the devastation of world war i brought about an end to the sense