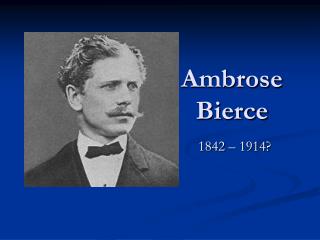 Ambrose Bierce. 1842 – 1914 ?. Ambrose Bierce. Born in Ohio; grew up in Indiana 10 th of 13 children – all had names beginning with the letter A Raised in poverty- which shaped his unsentimental pessimistic view of the world. Ambrose Bierce - . “an occurrence at owl creek bridge”. subject of many legends. “if you hear of my being stood up

Ambrose Bierce - . a cynic “sees things as they are, not as they ought to be. hence the custom among the scythians of

Narrating Trauma in the Writings of Sam Watkins and Ambrose Bierce - . john casey university of illinois at chicago.