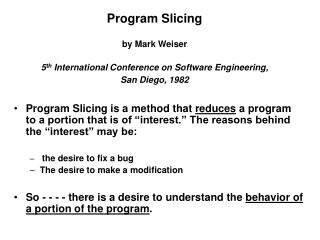 Program Slicing by Mark Weiser 5 th International Conference on Software Engineering, San Diego, 1982. Program Slicing is a method that reduces a program to a portion that is of “interest.” The reasons behind the “interest” may be: the desire to fix a bug The desire to make a modification

Current Event - . choose an article that is at least 2 pages in length if it is in a magazine or at least 1 column if it

KINE 482 Other Parts of the Journal Article - . david l. wright. today we will. read and proof the re-writes of the

The Article - . by mark. what is an article? it’s boring, that’s what it is . the definite article the ‘the’

2013-15 Collective Bargaining Agreement - . summary of substantive changes. where were the changes?. article 2,

BR #3.2: Article Summary - . you will find 2 articles at the front desks of each row. scan each article and summarize

Academic Summary Writing - . a how-to guide. what is an academic summary?. a brief piece of writing that highlights all

Summary and Critique - . what’s the difference…?. summary. what’d he say…?. summary. summary is a record in a

Options for Youth - There are 5 units for the class. for each unit you will need to complete:. 10 p.e. log hours1 sport