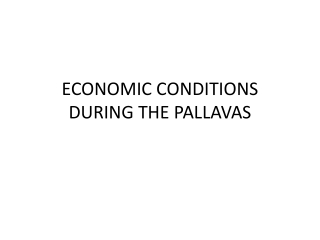 ECONOMIC CONDITIONS DURING THE PALLAVAS

ECONOMIC CONDITIONS DURING THE PALLAVAS. ECONOIC LIFE Agriculture . The economy had remained self sufficient of the Pallava Kingdom was chiefly based on Villages and agriculture Paddy and Cotton were extensively cultivated . Rice was exported to China and East Indies .

ECONOMIC CONDITIONS DURING THE PALLAVAS

Draw and label the Ganges and Yangtze Rivers on a map - . ganges and yangtze rivers. pollution. gps. ss7g10 the student

A Field Trip to the Congo-- Hydroacoustic measurements in &quot;the river that swallows all rivers&quot; - . john

The Indus and Ganges River Valleys - . a large landmass that juts out from a continent. what is a subcontinent?. nw:

The Ganges - . the ganges contents page. introduction history of the river how has the river been affecting the people?

AN Endangered SPECIES THE GANGES RIVER DOLPHIN - . by: azeezah . about the ganges river dolphin. dolphins are one of the

What Makes Evidence Relevant? - . topic sentence: the hindu people refuse to acknowledge the pollution in the ganges

River Pollution in Southern and Eastern Asia - . ss7g10 the student will discuss environmental issues across southern and

Environmental Issues Across Southern and Eastern Asia - . ss7g10 the student will discuss environmental issues across

Environmental Pollution in India - . essential question: what are the causes of pollution in india?. ganges