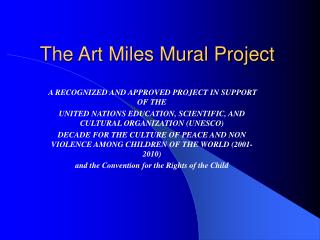 The Art Miles Mural Project. A RECOGNIZED AND APPROVED PROJECT IN SUPPORT OF THE UNITED NATIONS EDUCATION, SCIENTIFIC, AND CULTURAL ORGANIZATION (UNESCO) DECADE FOR THE CULTURE OF PEACE AND NON VIOLENCE AMONG CHILDREN OF THE WORLD (2001-2010) and the Convention for the Rights of the Child.

Mural Art - We provide state of art engraving services and products. our services include engraving of letters, photos,

The Mural Art of Diego Rivera - . on your hand out…. in the top box of today’s hand out, please draw what animal you

Chapter 9 Mural Project - . whoop whoop!. murals:. 3 groups – each group will have a branch of government legislative

Cabeza de Vaca Mural Project - . mural project. create a mural of a scene that cabeza de vaca might have seen when

Mural - . the design. mural space. slogans. can you think of a slogan to go at the top if the mural? it must: be clear

Behind the Mural - . reentry workers paint murals throughout the city of philadelphia for the mural arts program . .

The School Mural - . article. a piece of writing often found in a newspaper or magazine. community. people living in a

Art project - . juan felipe acuña. questions. 1-explanation of your appropriation 2-why do you think usa is an important