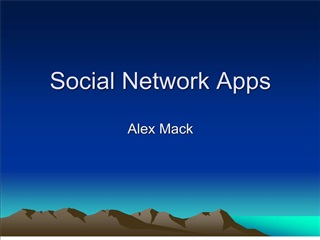 Table of Contents. TweetdeckGoogle WaveOpenSocial. Tweetdeck. Tweetdeck is an Adobe Air desktop application used to access Twitter. Tweetdeck is available for the Windows and MAC operating systems. It is made of panes that allow you to take the enormous amount of information contained within Twitter and break it down into parts that are more easily managed..

Social Network - . what is a social network. mobile phone. msn. facebook. keep in contact 24/7 allows me to stay out

3. Tweetdeck Tweetdeck is an Adobe Air desktop application used to access Twitter. Tweetdeck is available for the Windows and MAC operating systems. It is made of panes that allow you to take the enormous amount of information contained within Twitter and break it down into parts that are more easily managed.

5. Tweetdeck Features Update in a click - Update all your friends easily on Twitter, Facebook, MySpace, LinkedIn, Foursquare and Google Buzz. Write messages in the update window, view your character count, and then notify everybody about the update Take advantage of an increased Twitter API rate - TweetDeck can manage how your rate is allocated so all your Twitter columns are constantly updated. You can also do this yourself through the settings panel.

6. Tweetdeck Features (cont) Retweet Twitter style - or your style - its up to you! - All retweets are now visible in your TweetDeck columns, and if it was sent using the Twitter method, you'll can easily see from the avatar the person who retweeted, and the original sender Manage your conversations - TweetDeck makes it easy to follow your conversations, reply, or direct message people right from their tweets. See exactly what your friends are twittering about and join the conversation in just a few clicks

7. Tweetdeck Features (cont) Watch & Record Video - Watch video clips from YouTube, TwitVid, 12seconds and Qik without leaving TweetDeck. Record videos directly from TweetDeck with TwitVid and 12seconds and then share them on Twitter and Facebook in just a few clicks. Manage multiple Twitter accounts easily - View all of the information you need from all of your account at once. And cross-post tweets to different accounts at the touch of a button. See what’s trending - Use Twitscoop to see what’s hot across Twitter right now, plus see what your friends are talking about with local trends

8. Tweetdeck Features (cont) Add, create and modify Twitter Lists - Follow, create and manage both public and private Twitter Lists from within TweetDeck. Export your old TweetDeck Groups to Twitter Lists and add columns to monitor your favorite Lists using a slick new interface. Stay updated with Real-Time Search - Create search columns which auto update every time someone in the Twitterverse mentions the search term. Create search columns for anything you want to stay informed about

9. Tweetdeck Features (cont) Organise and Update Facebook - Create groups for all your Facebook friends. Express yourself more easily by sharing photos, links, wall posts, comments and status updates directly from TweetDeck. See who's following you - You can add a special separate 'New Followers' column in TweetDeck. Click on the New Followers icon in the Twitter menu, to load this into your TweetDeck. Locate your friends - Geolocation information for a tweet is now displayed within TweetDeck. If your friends have tagged their Tweets with the location, you can instantly see where they were

10. Tweetdeck Features (cont) Take TweetDeck with you, wherever you go - Sync your TweetDeck columns across multiple computers and your iPhone. Back-up and safely store all your TweetDeck information, and never worry about accidentally deleting a group again Say no to Spam - Avoid Twitter spam with TweetDeck’s spam button. Just one click will delete the message from view, block the user and report them to Twitter Share and preview photos - Drag and drop an image into TweetDeck to share it on Twitter, Facebook or MySpace. View thumbnails of photos inside TweetDeck and go directly to the full photo on the web with just one click

11. Tweetdeck Features (cont) Keep your finger on the pulse with MySpace - Stay in touch with everything that’s happening on MySpace with columns for status and moods, comments on your profile and your friends’ activity stream, including photos, events, videos, apps and more. Interactive and informative notifications - Notifications pop-up clearer and more interactive. Notifications now display your new messages, complete with all the actions you'd normally use.

12. Tweetdeck Review Kim Woodbridge from (Anti) Social Development reviews: She had Tweetdeck open for 5 days and it is used over 600MB of memory. She had heard people report 1GB of usage. If the computer and Tweetdeck was left running all of the time, then Tweetdeck needed to be restarted periodically

13. Tweetdeck Review (cont) If you accidentally close the group pane, you will lose that group. Once you have a large network, scrolling through all of the users to recreate the group is tedious. It is best to wait 24 hours of actively running Tweetdeck before creating a group, because people in your network will not show up in the list until they tweet. It generally takes 24 hours for everyone to say something at least once. Something she only noticed recently is that all users show up in the list for creating a group even if you have unfollowed them. It increases the number of users to scroll through when creating the group.

14. Tweetdeck Review (cont) Tweetdeck, with only 3 panes open, is a big program. It’s best used on a second monitor. Overall, Tweetdeck is one of the best 3rd party applications for Twitter access and management.

16. Google Wave Google Wave is a product that helps users communicate and collaborate on the web. A "wave" is equal parts conversation and document, where users can almost instantly communicate and work together with richly formatted text, photos, videos, maps, and more. Google Wave is also a platform with a rich set of open APIs that allow developers to embed waves in other web services and to build extensions that work inside waves.

20. Radio waving Clear Channel in Greensboro, North Carolina used a wave called Big Game Home Invasion. It’s an on air and on line promotion involving two clients. They did an entire project in wave in just a fraction of the amount of time it would normally have taken.

24. Debatewise Global Youth Panel: Waving on climate change (cont) The debaters had to continually form summaries of the discussion in the first blip.

25. The Complete Guide to Google Wave Ebook: $9; Full color Paperback: $25 plus shipping Chapter 1 Meet Google Wave - Find out what Google Wave is and what problems it solves Chapter 2 Get Started with Wave - Set up your Wave account and create your first wave Chapter 3 Manage Your Wave Contacts - Find and add people and groups to collaborate with in Wave

29. 5 Tips for Using Google Wave to Write an Academic Paper Lay Out Specific Rules and Guidelines Consider Meeting in the Same [Physical] Room There’s No Such Thing as a Bad Idea Separate Content as Much as Possible Into Blips Experiment

30. Pros & Cons for Google Wave Pros: Wave really is extraordinary collaborating in a live document The entire process is sped up There was ownership for everyone involved Playback is really nice Indented replies are useful

31. Pros & Cons for Google Wave (cont) Cons: What about footnotes? - If you wanted to use footnotes, you would have to write the whole paper, then cut and paste the paper from Google Wave into Microsoft Word to add them Drag and drop blips? - Sometimes, it’s a bit tedious to clean-up a wave to prevent it from becoming too messy. You would have to cut and paste the content in order to move it, but the blips should have some drag and drop functionality to wave

32. Pros & Cons for Google Wave (cont) I wish Wave were faster – Google Wave running in Firefox or Safari, had a much more laggier experience than it running in Chrome The experience was sometimes a bit chaotic - It is easy to get lost in a wave once you start throwing out ideas and replying to different blips. Wave does not organize your content for you. Any final formatting had to be done in Microsoft Word

35. OpenSocial (cont) <Module> indicates that this XML file contains a gadget. <ModulePrefs> contains information about the gadget, and its author. <Require feature="opensocial-0.8" /> denotes a required feature of the gadget — in this case, the OpenSocial API (v0.8). <Content type="html"> indicates that the gadget's content type is HTML. This is the recommended content type for OpenSocial containers, but gadgets for other containers such as iGoogle support other content types. <![ CDATA[…]]> contains the bulk of the gadget, including all of the HTML, CSS, and JavaScript (or references to such files). The content of this section should be treated like the content of the body tag on a generic HTML page

36. OpenSocial (cont) Running your first gadget: A text editor, or the Google Gadget Editor (GGE) Web hosting, or the built-in hosting in the GGE A Google account Access to the iGoogle sandbox