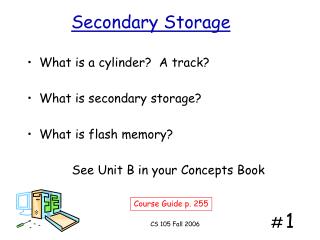 Secondary Storage. What is a cylinder? A track? What is secondary storage? What is flash memory? See Unit B in your Concepts Book. Course Guide p. 255. What is (Auxiliary) Storage?. CD-ROM Tape Backup Hard disk Zip Drive Floppy Disks DVD. RAM

Memory and Storage Devices - . to estimate the memory requirements you must have a sense of the project’s content and