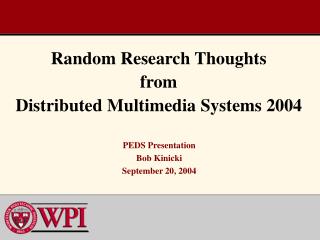 Steganography - . -archana sapkota -deepti reddy. what is it?. the art and science of writing hidden messages in such a

I. Sample Geometry and Random Sampling - . a. the geometry of the sample our sample data in matrix form looks like

Some random thoughts of IPv6 - . marcial white university of advancing technology. the gameplan. what is the internets?