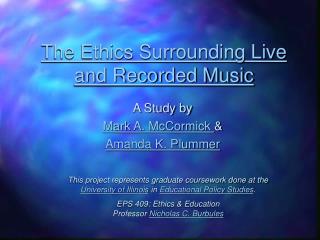 The Ethics Surrounding Live and Recorded Music. A Study by Mark A. McCormick & Amanda K. Plummer. This project represents graduate coursework done at the University of Illinois in Educational Policy Studies .

Offer Versus Serve - . welcome !. offer versus serve. is this meal reimbursable?. brought to you by:. goals of the ovs