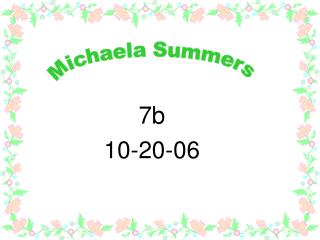 Michaela Summers. 7b 10-20-06. Fantasy: Fiction characterized by highly fanciful or supernatural elements. These are other fantasy genre books that you may enjoy: The Wizard of Oz By: L. Frank Baum Peter Pan By: J.M. Barrie Alice in Wonderland By: Lewis Carroll

Vocabulary 7b 11-20 - . infraction: noun: a breaking of a law or obligation. mitigate: verb: to make milder or softer, to

Investigation 7B - . the geometry of molecules. structural diagram:. this molecule looks like it should be “straight”

22/06/10 - The funcube project – the background. given that: cubesats are “cheap” cubesats can be built quickly