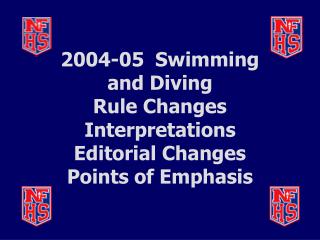 2004-05 Swimming and Diving Rule Changes Interpretations Editorial Changes Points of Emphasis. Rule 2-7-2 Water Depth. Water a minimum of four feet deep is required from the end wall to a minimum distance of 16’5” (5 meters) from the end wall, when racing starts are used. . SITUATION #1.

Rule 42 Presentation April 27-28, Finland - . made by: sofia truchanowicz. what do we want to achieve?. to understand the

ECG interpretations - . objectives. by the end of the presentation learners will be able to define the term

Interpretations of I - . does environmental policy have any foundations?. some candidates. vulnerability utilitarianism

Scuba Diving - . what is scuba diving?. scuba diving is the art of underwater diving with a scuba set to breathe under

Revision of WMO No. 258 and its implications, with emphasis on Aeronautical Meteorology - . jeff wilson director, wmo