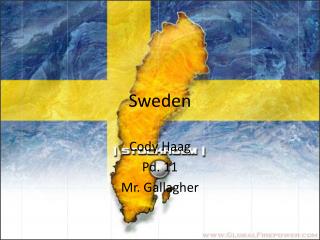 Sweden . Cody Haag Pd. 11 Mr. Gallagher. Swedish Flag. According to Ancient and Heraldic traditions much symbolism is associated with colors. The colors on the Swedish flag represent the following Yellow - a symbol of generosity

Sweden The Land of the Midnight Sun - . sweden’s flag the capital of sweden is stockholm.

Sweden - . ishika patel. language. the swedish language is very similar to the languages of norway, denmark, and iceland.

Sweden - . nick porterfield. 800 – 1050 viking age. unclear history or when sweden was first a nation expansion of the