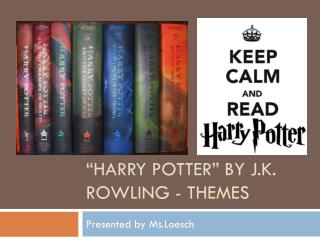 “Harry Potter” by J.K. Rowling - themes. Presented by Ms.Loesch. Background on J.K. Rowling. Born as Joanne “Jo” Rowling on July 31, 1965 Known as the most influential woman in Britain next to the queen “Rags to Riches” life Harry Potter Wii - Harry potter lego game can be enjoyed by children of all ages. it is kinect compatible for gamers who

Harry Potter and the Deathly Hallows - . next page. by j. k. rowling project by ilhui bravo. introduction. on this book

J.K.Rowling - . j.k.rowling. j.k.rowling is one of the most famous writers in the world and is best known for her book

Harry potter and the deathly hallows By J.K.Rowling - . the characters are harry potter,ron,hermione and dumbledore.harry

Harry Potter and the Half-Blood Prince By: J.K. Rowling - . “…for heaven’s sake – your wizards ! you can do magic

The Author - . joanne rowling. my focus statement ♥. literature inspires the imagination in many ways . j.k rowling

Harry Potter and the Order of the Phoenix - . coming 21 june 2003 to bookstores worldwide. what will happen to the