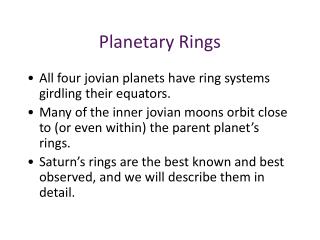 Planetary Rings. All four jovian planets have ring systems girdling their equators. Many of the inner jovian moons orbit close to (or even within) the parent planet’s rings. Saturn’s rings are the best known and best observed, and we will describe them in detail.

Planets - . 6.e.1.2 explain why earth sustains life while other planets do not based on their properties (including types

Saturn and its ring - . recall basic facts about saturn. further from the sun than jupiter (a =9.54 au) systematically

Moons - . the satellites of the solar system. moons of our solar

Saturn - . by: chumani wayd. about saturn. in roman saturn is the god of agriculture. the associated greek god, cronus ,

Saturn, Its Rings, and Many Moons