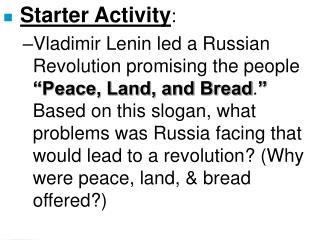 Starter Activity : Vladimir Lenin led a Russian Revolution promising the people “Peace, Land, and Bread . ” Based on this slogan, what problems was Russia facing that would lead to a revolution? (Why were peace, land, & bread offered?). The Russian Revolution. A Country Falls Apart One in Messiah Congregation - . lost tribes or scattered?. what happened on this date?. today is the 5 th day of the 4 th

Why was the Provisional Government so short lived? - . all- describe the key events of 1917 most- explain why the

Starter #1 - . write down the 7 steps of the writing process. starter #2. explain in your own words why it is important

Chapter 14: World War I &amp; The Russian Revolution - . section i: the great war begins. many saw the world as a