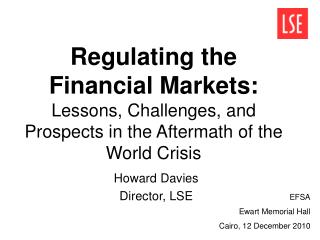 Howard Davies Director, LSE - With the benefit of hindsight… lessons from the credit crisis for banks, regulators and

Sarah Davies HCI - Powerpoint - . this is an example of a bad colour scheme/layout because the ‘fussy’ backgroud