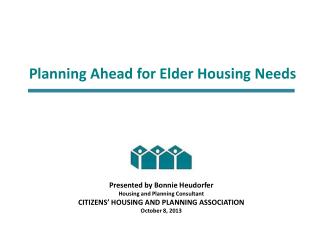 Planning Ahead for Elder Housing Needs

Planning Ahead for Elder Housing Needs

Who Decides/Planning Ahead: Legal and Financial Issues for Dementia Caregivers - . presented by. planning dynamics for STATE OF THE HOUSING AND HOUSING FINANCE SECTOR IN 2012- 13 - . 35 th meeting of the chief executives of hfcs, psbs and

What Is Planning For Elderly And The Disabled? - . planning for the elderly and disabled focuses on clients or their

Transition to Adulthood with ASD: What Parents and Guardians Need to Know - . eligibility vs. entitlement. special

How Green is Affordable Housing? - . it can be very green!. what is affordable housing?. &lt; 30% of income going to

Today - In the context of (a lack of) national housing policy for older people: should we be asking older people to move?