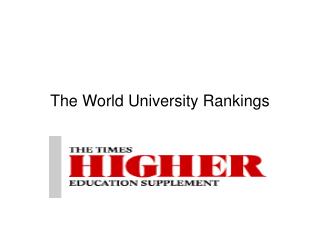 IAUP and the World University Consortium (WUC) - . iaup = the “global voice” of higher education. need for a n ew p

Why web-based rankings of universities should not be neglected Isidro F. Aguillo - World university rankings symposium

UNIVERSITY OF WARSAW - . university of warsaw. the largest and one of the best universities in poland flexible

National university rankings and the evolution of global rankings - . how quality and competitiveness of the european

Education, research and innovation since 1666 - . lund university. sweden in the world. did you know this about sweden?.

AARHUS UNIVERSITY - . the vision of aarhus university is to belong to the elite of universities and to contribute to the