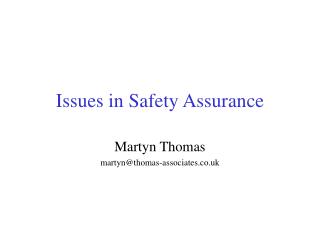 Issues in Safety Assurance. Martyn Thomas martyn@thomas-associates.co.uk. Summary. I want you to agree that: Safety Integrity Levels are harmful to safety and should be abandoned. We must urgently design a new basis for developing and assuring/certifying software-based safety systems. Safety Issues - . use of encs in ecdis. weakness in the enc. safety items by using enc electronic nautical chart: