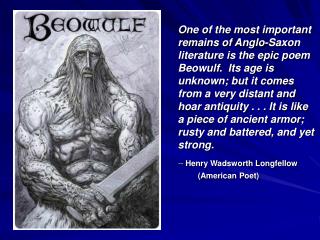 One of the most important remains of Anglo-Saxon literature is the epic poem Beowulf. Its age is unknown; but it comes from a very distant and hoar antiquity . . . It is like a piece of ancient armor; rusty and battered, and yet strong. -- Henry Wadsworth Longfellow (American Poet).

Beowulf - . an epic tradition. why study beowulf?. 1. beowulf is the oldest poem in the english language, so everything

I. Historical background - One of the most important remains of anglo-saxon literature is the epic poem beowulf. its age

Beowulf Background: Geography - . germanic tribes battled for control after causing the downfall of the western roman

Choose ONE Beowulf essay prompt: - . write an essay in which you compare and contrast beowulf with other epics you have