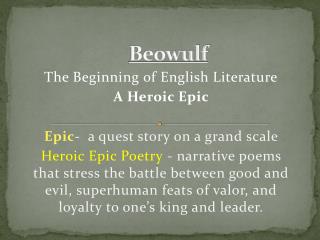 Beowulf. The Beginning of English Literature A Heroic Epic Epic - a quest story on a grand scale Heroic Epic Poetry - narrative poems that stress the battle between good and evil, superhuman feats of valor, and loyalty to one’s king and leader. Background.

Medieval Romance and Le Morte D’Arthur - . arthurian legends. reflect: create a chart like the one below to reflect the

Introduction to Beowulf - . story isn’t about the english—it’s about the danes and the geats. so what’s it doing

Beowulf : The Beginning of English Literature - . beowulf’s name . beowulf’s father– edgetho in most cases, the son

K About a hero Grendel the monster Beowulf kills Grendel Grendel’s mother is mad. - K about a hero

1. Allusion - . a reference to something outside the text, such as another work of literature. in section 1 of beowulf ,

Part IV: The Battle with Grendel’s Mother - . warm up do you believe that the manner in which beowulf killed grendel